Yesterday, Sunday Aug 11, I missed photographing the flowers at my daughter’s farm market booth, which I almost never miss.  Why did I? Because this event was taking place in Gettysburg. As a professional photographer and a student of American history, I can’t express how much I appreciated it.  War Photography has evolved radically since the Civil War, as has warfare. 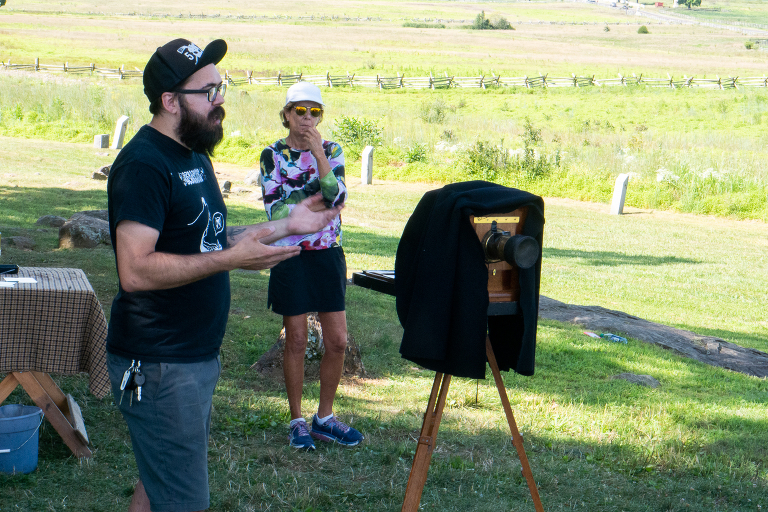 War Photography at the time of the Civil War

First up on the battlefield was Dave Wilson, of Victorian Photography Studio in Gettysburg.  Dave’s original period view camera and portable darkroom were extremely interesting to me, having started my career with a 4×5 view camera, film and a darkroom.  But what I did in 1985 was about as far from what photography was like in the 1860’s as digital photography is now from when I started.  Dave showed and explained his period appropriate tintype photos, then discussed the advances up to glass plate negatives.    Below is Dave’s portable tintype darkroom. 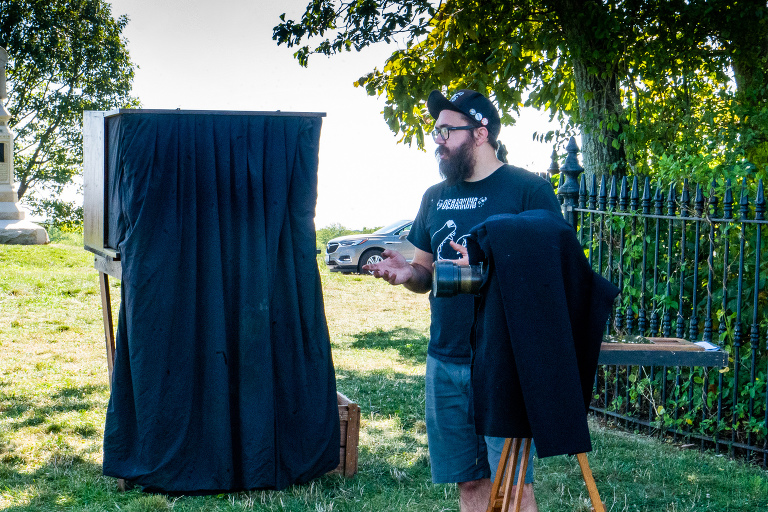 The portable darkroom was usually an enclosed wagon.

Then Louie Palu took over to discuss what he has experienced as a combat photographer in Afghanistan, Mexico, Guantanamo and many other locales.  https://louiepalu.photoshelter.com/index

Below, I’ll attach a few images from Dave and Louie’s presentation.  If you wish to see more of his work, there is an outdoor art installation of huge images in the woods behind the Visitor’s Center at Gettysburg National Battlefield. 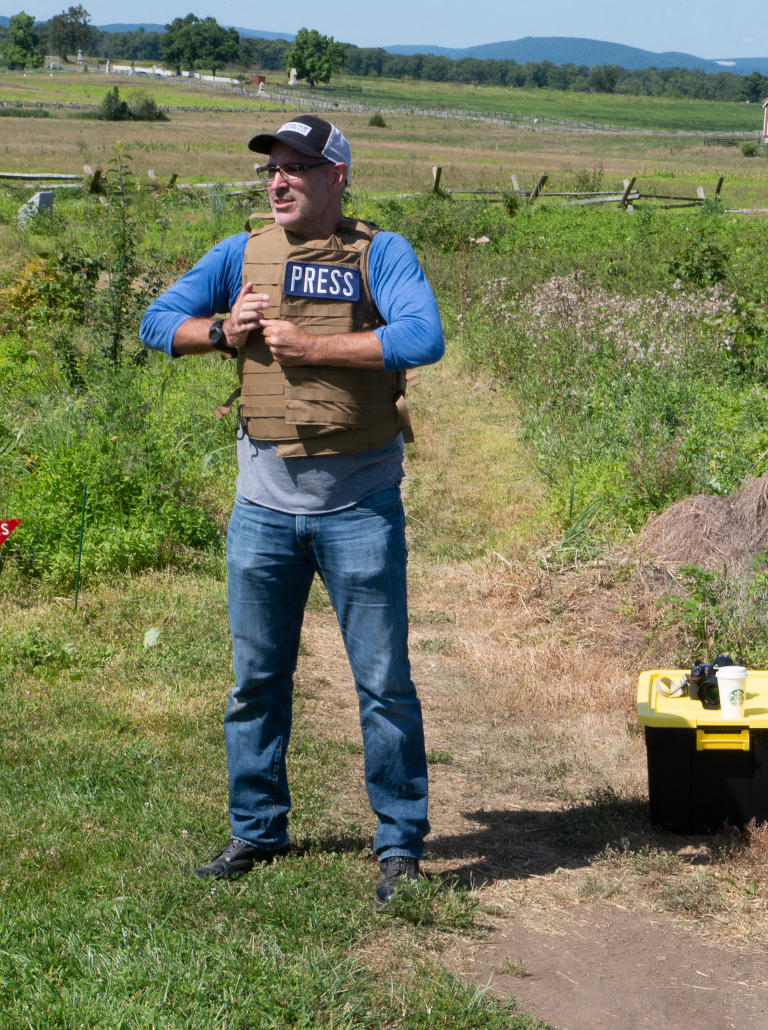 Louie and the 16 pound+ flak jacket that is essential gear for combat photographers and soldiers.  Hopefully the “Press” is helpful to safe travels, but it’s not a sure thing.

Below, we see a demonstration of the tourniquet Louie carries (two of them) plus the additional medical supplies in the small kit on Chloe’s stomach.  This is a much smaller kit than actually carried in the field, attached to the Kevlar vest.  All in all, with camera gear, medical kit, backpack and water plus helmet, it’s not unusual to have 80-100 pounds of gear on one’s person in the field, in 100-120 degree temperatures. 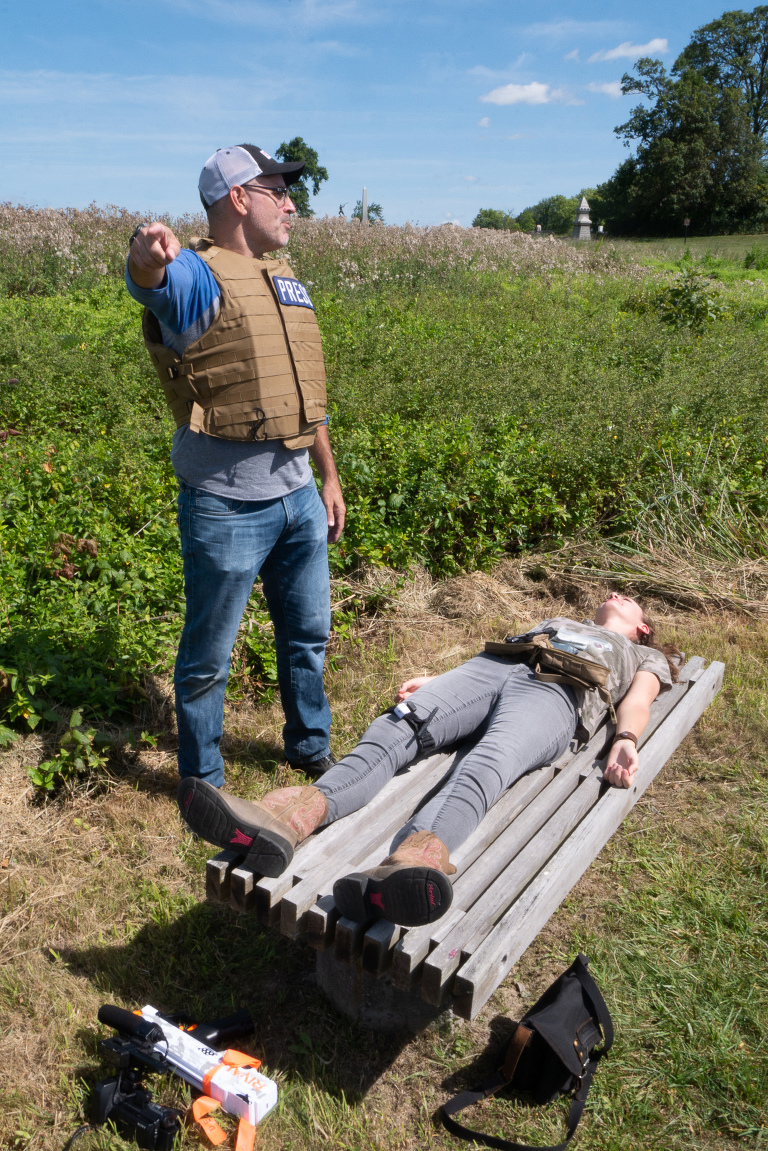 Tourniquets are two per person, due to landmines and multiple limb injuries

In the foreground (above) are a video camera and the white “gun”.  As you can see, it would be impossible to tell which was which, especially since the guns are never white like this one (which was selected in order to not be alarming to other visitors to the Park).

(BTW, in training for medical use in the field, you have to learn to apply your own tourniquet with one hand.  Think about why.) 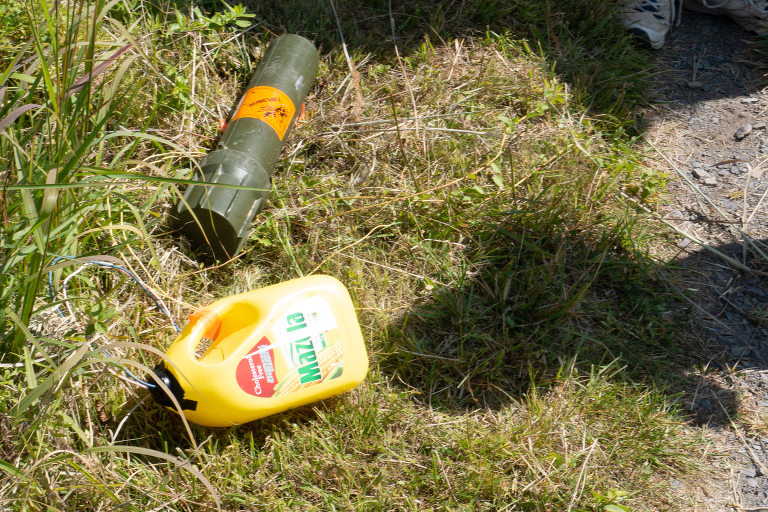 IEDs may not be bright yellow, but are often seemingly harmless for a reason 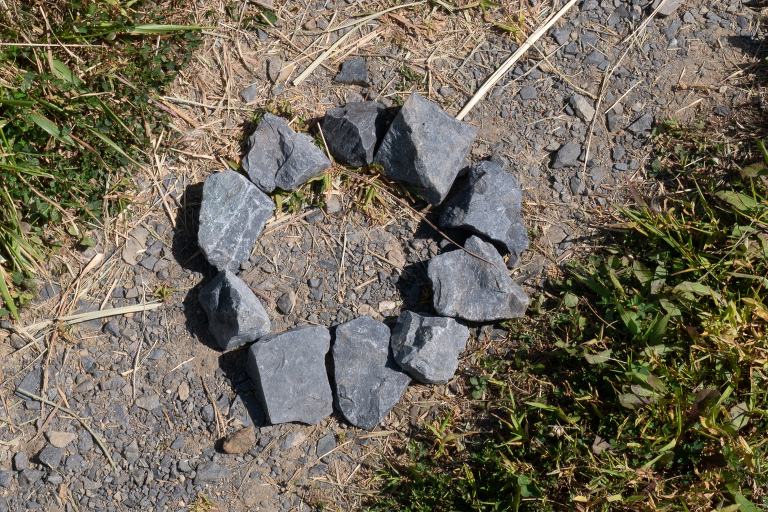 In war torn parts of the world, especially developing nations, its necessary to warn people away from land mines, often without the sophisticated signage put up by western armies.  The indigenous population uses such simple tools as rocks to surround known mines.  That doesn’t mean there aren’t others undiscovered nearby, however. 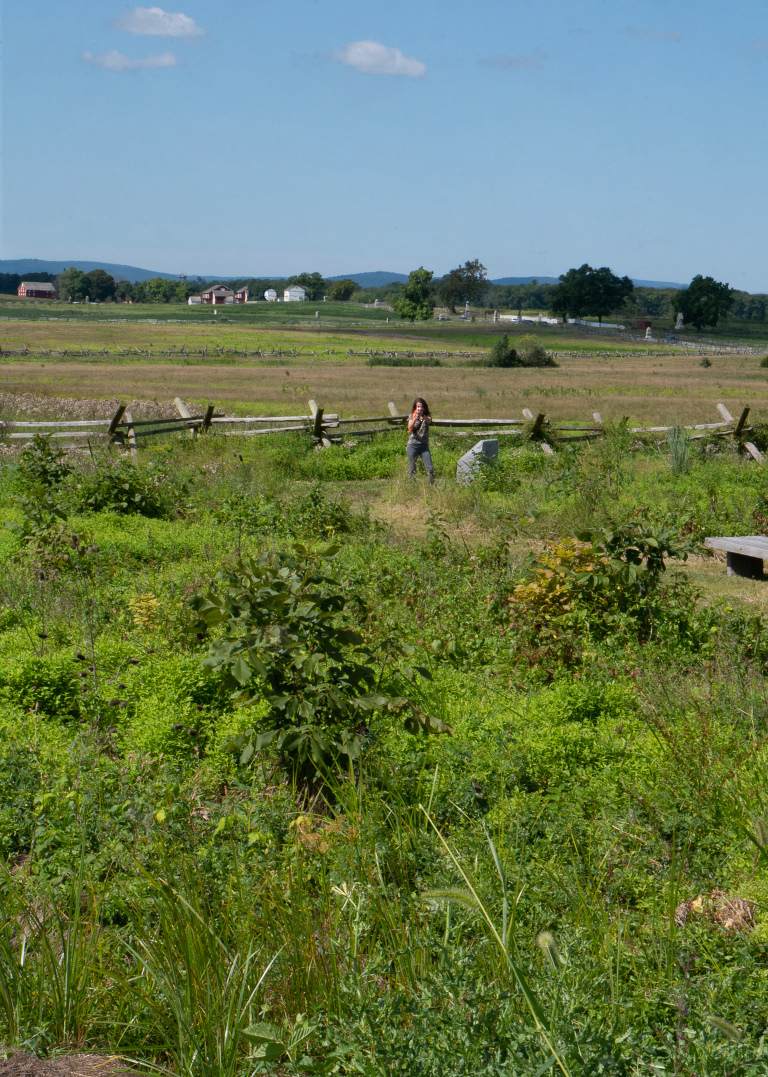 Is that a shooter or a photographer?

The dilemma created by aiming a camera in a combat zone: To a soldier, usually much further away than this, the question becomes “Is that a camera or a gun?” Can you tell?  This happens to be a “gun” (with orange tape on it to prevent frightening park visitors) as well as making it visible enough to lull a soldier into a fatal oversight.  Combat photographers must be aware of the dangers of pointing a camera at a soldier who may shoot first and ask questions later.

A mile walk in Hell

And, as I leave the presentation, looking back over my shoulder, I see Dave Wilson, still talking with visitors.  He’s standing on the ridge that is  the “high water mark” of the Confederacy, where on July 3rd Pickett’s Charge came closest to breaking the Union lines on Cemetery Ridge, which might well have resulted in a defeat sufficient to divide the United States into two nations.

On the far right side of this photo is the 28 foot tall statue of Robert E Lee.  The deceptive distance between that stature and where I stand to take the photo is 1 mile.  The attackers walked that entire mile under a constant barrage of canon fire, until they drew close enough for Union rifle fire to be effective; plus of course, canister (think huge shotgun shell, fired from canons).  Of the roughly 12,500 Rebel soldiers taking part, 5100 were killed or wounded and 3700 were captured.   That took place in about 45 minutes to an hour.  Do the math.

Commercial and advertising photographer, Jeff Behm, is also an enthusiastic student of American history, and can frequently be found at historic landmarks and parks throughout the United States.  See “https://www.behmphoto.com/gettysburg-a-too-brief-visit/” for an account of his visit on the 150th anniversary of the Battle of Gettysburg.

Call Jeff at 724-730-8513 (cell) or email jeff@jeffbehm.com to discuss your advertising or corporate event coverage.  Be sure to visit www.jeffbehm.com to review his portfolio.