Frederick – The Hub of western Maryland

Farming, forestry, tillable land, navigable rivers and roads combined to make Frederick, MD. the center of a network for travel since earliest times in Colonial America and onward through today.  Looking at the map with its modern interstates, I-70 and I-270 get the most attention and traffic.  But the original National Road, Rt 40, runs straight through town, as do roads now called Routes 15, 355, 26, 340, 351, 85, 194 and 180.  All intersect in Frederick.  Roads that run near town and connect to those routes include 75, 80, and 17.  Like the spokes of a wheel with Frederick at the hub, there are roads going north, south, east and west as well as compass points in between.  If you are marching an army anywhere, towns like Frederick are too important not to gain attention (much like Gettysburg, 30 miles north).  It’s not so much that men can’t march without roads, it’s the hundreds of wagons that carry food and supplies that absolutely require a road.  Multiple roads, more or less parallel to each other are better still, and Frederick has many such. 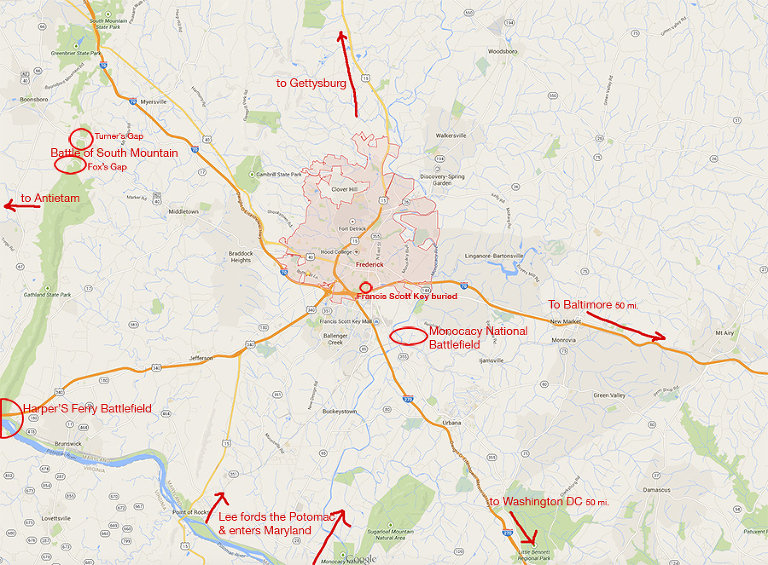 A few miles to the west are the Catoctin Range and South Mountain.  Steep and difficult passes with roads in only a few places made the mountains a greater barrier in the past than they are today, but their presence had enormous impact on the movements of armies.  To travel to Antietam from Frederick, the main access for both North and South was either through Fox’s or Turner’s Gaps, in which Confederate armies set delaying actions to slow the Union Army of the Potomac’s pursuit of Lee’s first invasion of the north.

Nowadays, people stop in Frederick for the dining (#1 Destination Dining City in all of Maryland) and the history.  The renowned National Museum of Civil War Medicine is here, as are The Spite House (look it up, really) and literally scores of other significant historic symbols dating from our nation’s early times.

In Colonial times, around 1764, the 17,000 acre Carrollton Manor was established starting on the south side of town for Charles Carroll.  For a taste of how much land 17,000 acres is, the boundaries were from the Potomac River on the south to Catoctin Mountain on the west, to the Monocacy River on the east and Ballenger Creek on the north. Buckeystown, Adamstown, Tuscarora and Point of Rocks were all within the plantation.  That’s pretty much the entire lower left quadrant of the map, above.  Today, even at superhighway speeds, it takes at around 45 minutes to drive from one border to another if you have no traffic. Talk about your one percenters!  Of course, Carroll Creek Park (below) and Carroll Street derive from that time, and from Mr. Charles Carroll of Carrollton.  Three of Carroll’s granddaughters married British nobility, the one great thing to which all wealthy Colonists aspired – entry to the nobility.

If, while reading this blog, you come across blank spaces that look as though they might have photos that aren’t appearing, click on your browser’s “reload”, the circular arrow in the URL space.  You may have to click more than once.   Or, if you see what looks like a small gray square about the size of a punctuation mark, click on that.  We apologize for this glitch and are seeking a solution.  It often occurs toward the end of a post.  Thank you. 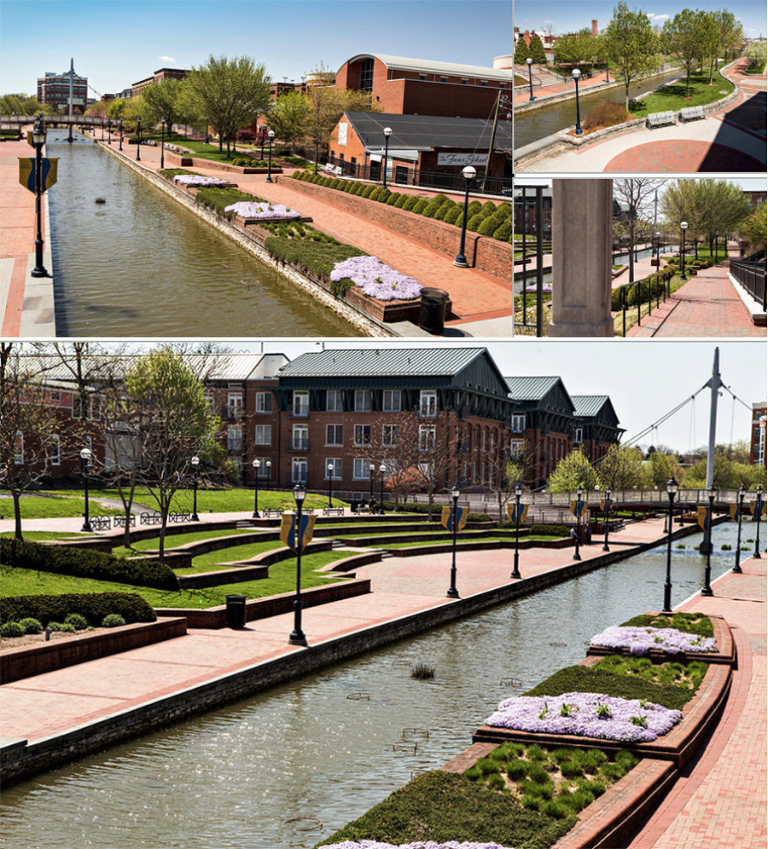 Francis Scott Key’s law office is still here, located across from the old courthouse on Court St, opened by him in 1801.  He’s buried in Mt Olivet Cemetery on the south side of Frederick, just off South Market St.  In fact, his modest little grave stone simply identifies him as “War of 1812 Soldier” with the rank of lieutenant, unlike the much more magnificent monument to him as the author of our National Anthem. Not long ago, I was lucky enough to be present here at Mt Olivet, when the original written Anthem was brought to Key’s gravesite, reuniting the author with his work for the first time in 200 years. 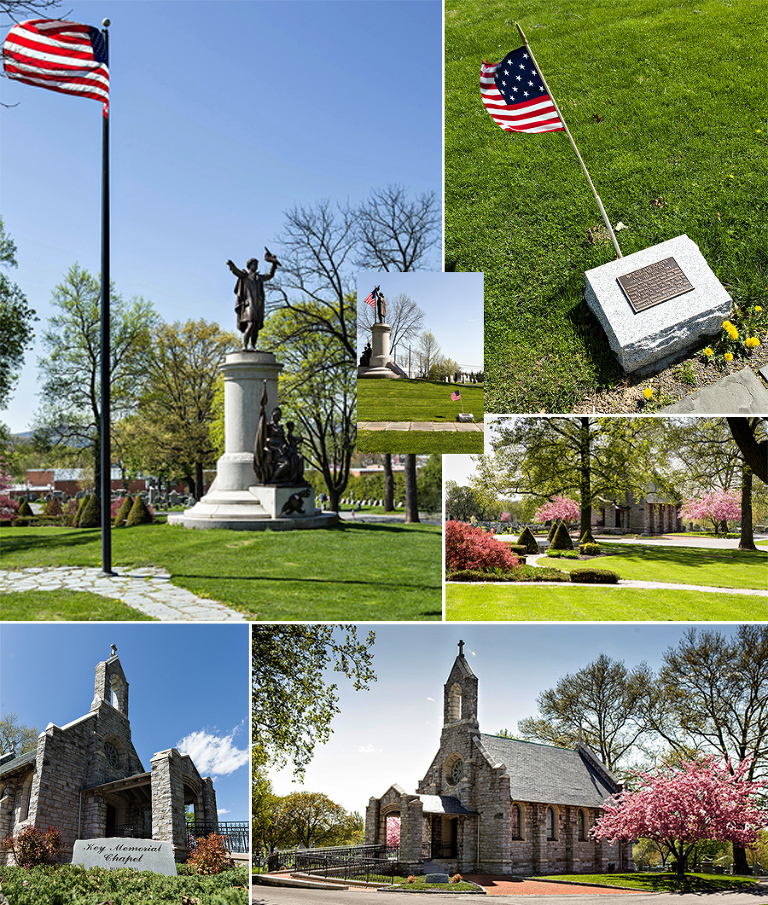 Only 40 years after Key penned the Anthem, Frederick was thrust into national prominence again as our nation ripped itself apart in the American Civil War.  Armies from both sides marched though town on their way to many engagements, including the two most deadly battles in American history.  Antietam, in September 1862, is the bloodiest single day and Gettysburg, summer of 1863, is the bloodiest battle overall.  Both are about a 30 minute drive from Frederick today.

“Up from the meadows rich with corn,

Clear in the cool September morn,

The clustered spires of Frederick stand

Green-walled by the hills of Maryland.”

Ms Frietchie may not really have acted as described, but Stonewall Jackson did pass through Frederick on the way to Antietam.  Deeply religious man that he was, Jackson attended church here a few nights before the battle.  And, courtesy of Whittier, the City of Clustered Spires remains the city’s chosen description.

In a huge irony and historical twist of fate, Jackson, Lee and Longstreet’s armies in 1862 would camp south of town near the Best farm (on what later became the site of the Battle of Monocacy, the only battle in the north the Confederacy won).  Just three days after the Confederates left, Union General McClelland’s army would camp there, too, finding a set of orders for the plan of march by Lee’s Army, and marking the turning point that led to the Emancipation Proclamation.  As I said, much of historical significance has Frederick ties, sort of a “six degrees of separation” to everything American. 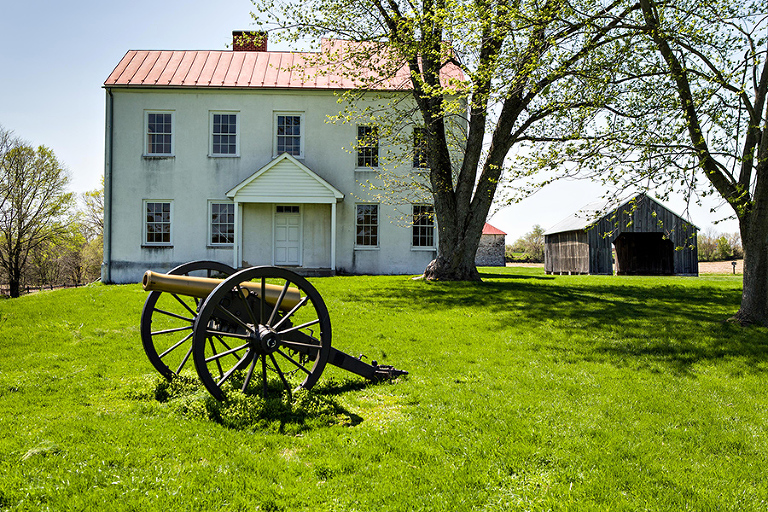 The Lost Order, the Battles of Antietam, Gettysburg, and Monocacy meet in Frederick with the Emancipation Proclamation, the story of Ben Hur and Barbara Frietchie

Approximately 9 months later, Jackson would die from wounds at Chancellorsville, thus not living to see both armies repeat their march through Frederick on the way to Gettysburg.

As the Confederacy was being strangled by Grant’s encirclement of Petersburg and Richmond, VA.,  Lee devised an attempt to capture Washington DC and perhaps so alarm the North that it would break Grant’s hold.  Lee sent General Jubal Early and 15,000 men in an arc up the Shenandoah Valley with the intent of sweeping east to the capitol.  Grant received word in enough time, however, to order General Lew Wallace with about 6,500 men, to delay Early until more reinforcements could arrive.  This Wallace did, and admirably, losing the battle to over twice as many men.  But in delaying Early, Wallace saved the capitol, earning praise from his commander, Grant.

In later life, that same Lew Wallace wrote Ben Hur.  Not a bad list of accomplishments, considering the importance of the Civil War, and that we’re still retelling the story he wrote, calling it Spartacus and Gladiator, as well as the movie version of Ben Hur.

Looking toward the Best farm on the Monocracy Battlefield