Care and Feeding of Rechargeable Batteries

A little while back, I wrote the piece below for both this blog and for The Professional Photography Forum’s articles section.  Then, recently, it gained attention once again when I linked it to a discussion on another photography forum.  Because it seems to be of renewed interest from time to time, perhaps it’s appropriate to ‘bump’ it up to the top of my blog again.  If you have rechargeable batteries that you suspect are not performing up to par, perhaps you’ll find an answer here.  Believe me, I was surprised to learn what I did as I spoke with battery charger makers and test tool manufacturers. One more thing, and you may see it as bad news: the “quick charge” battery chargers often supplied by the battery manufacturers are not your friends.  I won’t say they are intentionally designed to shorten the life of rechargeables, but after you read this, you may realize they are not designed to improve their performance, either.

If rechargeable battery life and reliability are important to you, and if you’d like to save some money through their proper use, read on.

As a professional photographer who must frequently illuminate darker rooms of various kinds, it’s probably no surprise to learn that batteries are important to me.  In today’s electronic world, maybe they’re important to you, too.

Care and Feeding of Rechargeable Batteries

Or…more than you may really care to learn…

Over the years, like most of us, I accumulated a large number of rechargeable batteries, always relying upon the chargers supplied with them by the battery manufacturers.  I didn’t know much about them, nor did I think much about that.  They were rechargeable but wore out far more quickly than I thought they should.  Battery memory was blamed, meaning the artificial reduction of the amount of charge that could be stored by the battery as it aged.

It was almost as though the battery was like a 10 story building with an elevator.  As long as you ran the elevator to the 10th floor regularly, then back to the ground, the elevator knew there were 10 floors.  But if you started to run it only to the 7th floor, then back down, it would forget there were three more levels it could access.  Batteries recharged before exhaustion are like that 7th floor run and eventually become bad batteries, capable of taking only limited charging.  Thus the need for lots of batteries in my work.

Once NiMH batteries became available, the buzz was that we’d see the end of battery memory in addition to improved life and power.  My experience was that these expectations were only partially true, leaving me still lugging 30 – 40 batteries to large events.

Spending more for the best batteries was no indicator, either, as they would lose their ability to hold a charge nearly as quickly.  I found myself still carrying up to 40 batteries to weddings in order to keep flashes firing.  It was customary to go through 24-32 at a wedding, and always have my “newer” ones in a charger somewhere in the venue so I could get them back in use sooner. 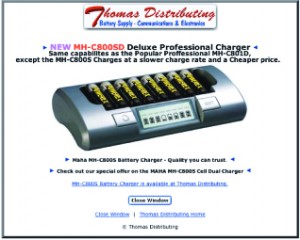 Finally, in exasperation I began to ask questions, and in short order was lead to Thomas Distributing online.  Through conversation with a Thomas customer service rep I also discovered  ZTS Testing, a manufacturer of tools for testing electrical current, including batteries under load, a very important consideration.  I called ZTS and spoke to an engineer there for a long time and got quite an education in the care and feeding of rechargeable batteries.

The first thing both these separate experts told me, was to get rid of the $20 charger from the store, and especially those “speed” chargers.  I learned that the rechargeable battery makers were not all that interested in making sure we get the most from their product, or sales would suffer.  So the retail level chargers, especially the speed chargers, aren’t really good for long battery life – speed kills.  Essentially it lays on what almost amounts to a surface charge which is more quickly dissipated.  Both also heat the batteries excessively, doing long term damage.

It was the ZTS engineer who laid the 10 story building analogy on me.  He also explained that the MAHA MH-C800S and 801D chargers I was interested in were capable of coaxing the most out of rechargeables.  Then he explained the one thing they did not have was a reliable indicator of whether a battery was healthy, capable of delivering full power for sustained time under working conditions.  That’s where the ZTS Pulse-Load tester comes in.

First, lets start with the MAHA charger.  One of it’s most important features is an option to select “Condition” or “Soft Condition”, depending on the model.  This is a function that charges then discharges the batteries completely, then recharges them very slowly, taking up to 30 hours to complete the entire job on one set.  When completed however, each battery is at the very best it can be at this stage in it’s life.

Once charged, I remo 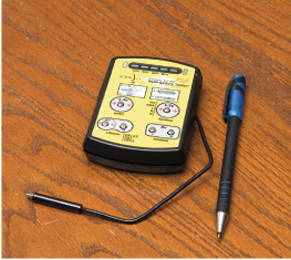 ve the batteries and allow them to sit for at least 2 hours, after which I put them in a flash and give them one pop, then remove them for testing with the ZTS Multi-Tester using the procedures that follow.

Do not use an eraser to clean terminals

To test: Clean the terminals of the battery and the tester with 91% isopropyl alcohol and a Q-Tip.  Do not use an eraser to clean terminals.  It abrades a protective coating that impedes corrosion.  Using an eraser actually hastens battery death.

Follow the directions for the ZTS tester.  After performing the charging, cleaning and testing procedures, any battery showing less than 80% should be taken to your local battery recycling center and discarded.

You’ll note (below) that there is a small tester pictured with the MAHA charger.  It’s a pretty common type, and is included when you purchase many chargers.  This tester, and those like it, is useless for determining whether a battery can deliver under load, which is the only  thing you or I need to know regarding the health of our batteries.  Therfore, we really do need the ZTS Pulse Load tester for long term monitoring of our battery inventory. 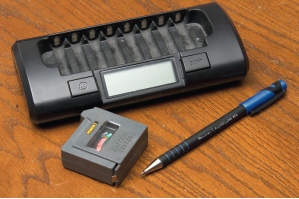 When using the MAHA charger, there are four main options.  “Regular”, which is moderately fast for quick charges. “Soft” is the recommended setting.  “Condition” is a rebuild of the batteries as described earlier, and “Soft Condition” is available with the 801D model, and what I do with problem batteries.

“How does a battery become a problem?” you ask.  In a set of four batteries, if 3 of them are perfectly good 100% batteries under our testing, but the fourth battery has slipped away into the sub 80% category, this bad battery will determine the life of the entire group, making them all, in essence, sub 80% batteries.  Unfortunately, that doesn’t go away after a normal recharge.  Those three now have about the same sub 80% capacity as the bad one, or the same problem as the elevator analogy earlier, in which they behave as though they are incapable of taking a greater charge.

That’s why periodic conditioning and testing is essential.  If found soon enough, those three batteries can be returned to full or near full performance.  The sub 80% should be recycled (by the way, where do you think cheap rechargeable batteries at some of the so called “dollar” stores come from? Yep.  Recycled, and usually poorly.).  For the many older batteries that test at 80%, I group them together for use with others of the same percentage.  Some sub 80%-ers get switched to TV remotes, a cordless mouse, or other less critical uses for a while longer.

So.  In the final analysis, what has all this OCD over batteries gained me?  I now can shoot an entire event of 1500 frames, using flash at least 1000+ times, and go through 4-8 batteries.  Yep, the set that was in the flash, and one change, usually midway though the reception.  If using a LOT of bounce flash, or using a light modifier that requires more power, I may go through 8-12 batteries.  I only carry 16 now, plus the MAHA charger, but I don’t recall the last time I had to charge batteries at a wedding or corporate event.

It’s a relief not to worry about battery life any more, and to have solutions when there are issues.  The camera bag is substantially lighter, too.

Posted in Technical, Uncategorized
Show Hide 1 comment
« Get to Know Your Digital Camera Class
Bending the light – a “How To” tip »