I tried to make this post a couple of days ago, but for some reason was unable to access WordPress (totally clueless as to why now, but not then).   So I apologize to those who read this on Facebook first, only to see it repeat here.  Hey, I’m adding an extra photo!

Loving photography and doing it for a living has certain traps, such as after a while not taking a camera to family events as often, because it feels like working when we’d rather socialize.  Or, being so busy with our photography at work that we lose the motivation to go out and create an image for fun.

I don’t know what happened last night.  Maybe it was all that coffee at a late dinner with friends, or inspiration arising out of the fog that had settled over the region, giving every light a halo effect.  But whatever it was, I’m glad I acted on the thought, because downtown Frederick was absolutely bustling with cars and early New Year revelers, the seasonal tree lights were aglow and this city I call home was totally alive at midnight.

Not being a fool with a death wish, I did wear a reflective safety vest like the highway workers. After all, I was standing in or very near the road in order to get the perspectives I sought.

Ironically, the fog downtown had pretty much lifted by the time I got there with camera gear, while it had intensified out on the edge of town, where I live.  So much so, that on the drive home it was nearly impossible to see landmarks such as fully illuminated gas stations until I was right on them.  Still, it was a good time, and I’m glad I made the effort. 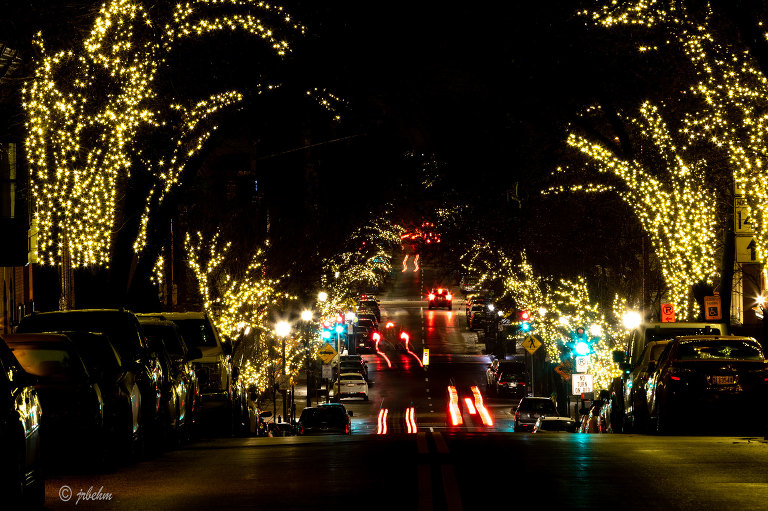 Jeff Behm Photography specializes in commercial and advertising photography, especially for food and jewelry.   Located in Frederick, MD, our principal area served is the greater Washington-Baltimore-Frederick triangle.  Call us at 724-8513 or email jeff@jeffbehm.com to learn how we can assist you.